Let’s kick off this part of the tour under Philadelphia.  This section is 3 miles long and runs 55 city blocks, both below the city and elevated above.  In the 1880’s this was used for passenger traffic and sometimes for freight.  When walking through the darkened, cool and damp tunnel the city above is muffled and another world opens up. 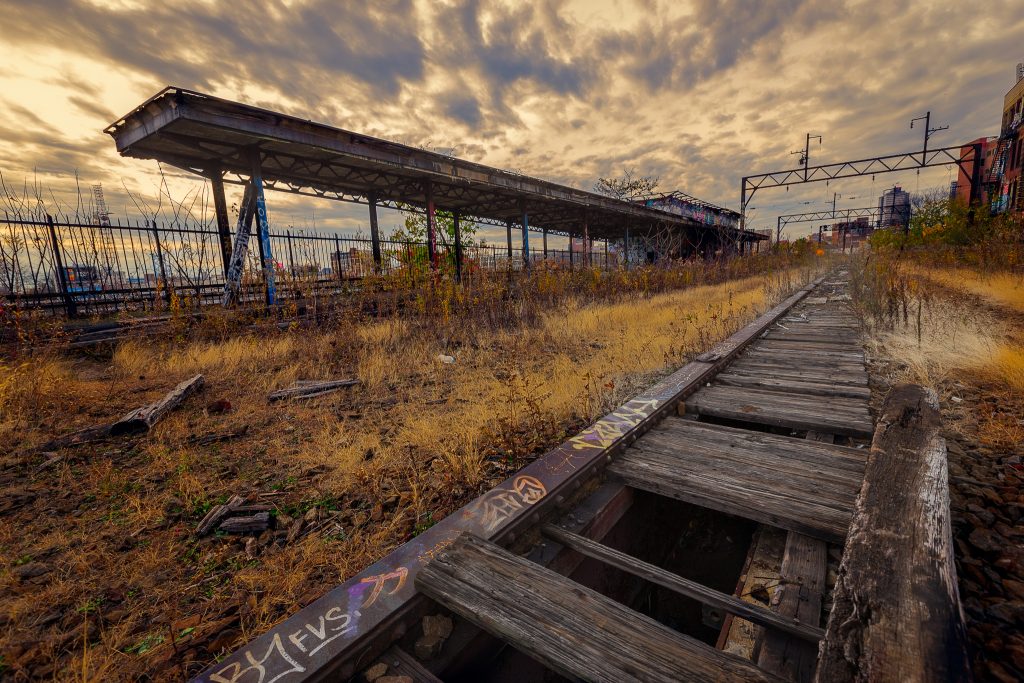 This is actually part of the same track that was in the tunnel I just showed you.  Yet again, I found myself in another world, separate from the city.  This one was exposed and raised above the busy traffic-packed roads.   In the background is an old station that I went into as well.  There are plans to convert this into a “greenspace”, for riding bikes and walking.  I believe every once and awhile a beer garden pops up in the easier accessible section.

On this summer night, I had planned on walking around Philadelphia with a group of photographers. But the forecast had a rain storm hitting at the same time and most of them canceled.  Just a handful of people ended up going, and we were treated to a spectacular sunset.    Everywhere you look had these colors, and this is the standard that was set for me.  It was the photographers high that I realized this gave me.  And I’ll forever be chasing it.

You have to have the classic cityscape shot with the traffic rushing by.  While everyone is busy down there, I’m taking it all in and freezing the moment in time.

Now here’s a fun shot!  I love it when Philadelphia embraces event and holidays by lighting up buildings with festive colors.  What you don’t see are all the people that like to come up and see what I’m doing.  Many friendly conversations pop-up, from locals wondering if I was with a news agency, travelling families from abroad, and a few “interesting” locals.

In contrast to the patriotic colors in the last shot, how about a black and white?  It opened in 1933 and is the main railroad station in Philadelphia.  Fun fact: In 2005, Amtrak asked to change the name of 30th Street Station to “Ben Franklin Station”.  The cost of replacing signs at the station was estimated at $3 million.  Years later the idea was dropped.

If you walked to the right of the last shot, and walked down the stairs, you’d be at this location.  On the right side is the 29 story Cira building.  This silver glass curtain wall skyscraper includes a wall of LED’s on most of its facade that can change color to create various patterns and effects.  In fact in 2013 PONG was played on the building and in the following year it was Tetris.  Making it official, Guinness World Records  deemed it the world’s largest architectural game display.

Sometimes a picturesque view sneaks up on you.  As I made my way to watch the new LED’s turn on Boathouse row, I saw this.  It just feels like summer was trapped in this shot.

I’ll leave you with this parting shot of the Ben Franklin bridge.  This was one of the more frigid winters we saw in this area.  Much of the banks of the Delaware River had frozen over, and you could see sheets of ice floating in the current.

Thank you for checking out these photos.  And if you haven’t seen Part 1, click on this and see it.  Feel free to share this or leave some feedback below.

Find something you like?  Take a look at my Etsy store.  If you don’t see what you want, or need help just contact me through Etsy.  I’d be happy to work with you.