You are here: Home / Adventure / Drizzle, Drips and Drops

Last weekend I made the trip out to Ricketts Glen State Park, in Pennsylvania.  What many people don’t know about, is all of the planning that goes into a photography trip like this.  It was a hot and dry summer, and most of the waterfalls in the area were down to a trickle.  Since it was raining for days ahead of this trip, it was a good sign for the waterfall flow.  I did have to keep an eye on the weather to see how bad the rain would be while there.    The day before the trip, I had to figure out what I needed in my backpack for the hike, and what I didn’t want to lug with me for the 5+ mile adventure.  I was able to get the backpack weight down just around 14 pounds.  I had my waterproof boots ready to go since I knew I’d be wading in water at some point.

I was meeting fellow photographer Dante Fratto here, so we could make the entire hike one way instead of doing the loop.  We left one car up top, and the other car at the bottom of the trails.  I’d be missing the waterfalls from the Ganoga Glen side, but making the full hike including the 3 at the bottom would have been too much.

I woke up at 3:30 AM and was on the road at 4:00 AM.  On my drive up, there was plenty of rain and fog.  I can’t tell you how much I love being out and taking photos with fog, it creates such a mysterious atmosphere.    As we drove up to the top parking lot, the mist grew heavy and visibility dropped.  I snapped a quick cell phone shot right before we pulled into the parking lot.  Whoa. 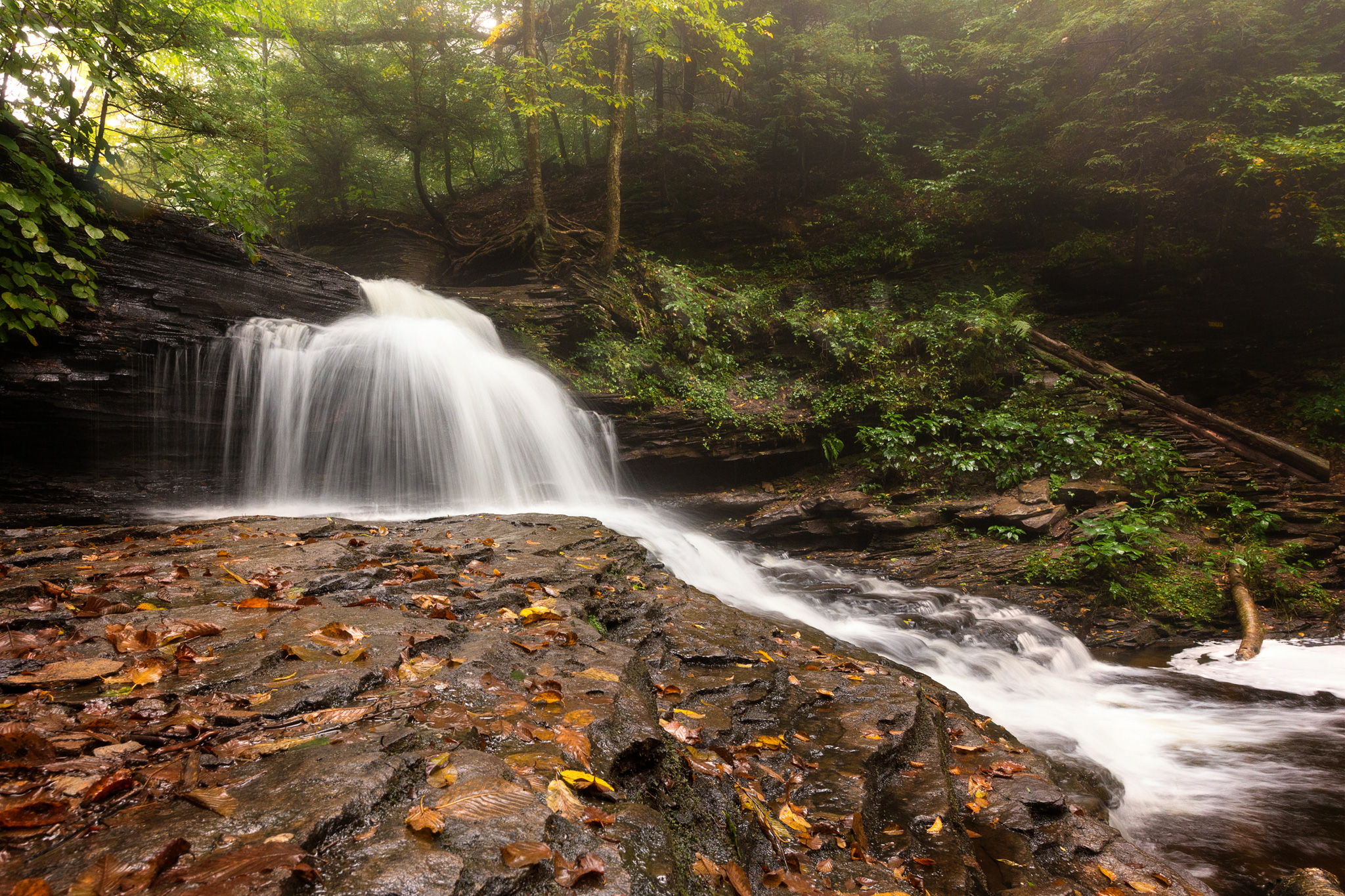 The first waterfall I came across on my adventure has an American Indian influenced name, Onondaga Falls. Many of the falls have American Indian names.  It instantly set the the tone for the hike down the trail. The heavy water flow was a pleasant sight to see, even though you could hear the constant roar from a ways off.   I like setting up the camera really low like this shot to show a perspective that you usually don’t see.  One person asked me if I put the leaves in the foreground, thinking that I placed them there.  To which I replied, “I tried placing a few leaves in a shot once, but I fell in the water, and nearly lost my camera.  Lesson learned, never again.”

From Wikipedia: “The Onondaga are an Iroquoian-speaking people and one of the original members of the Iroquois Confederation. They were geographically in the middle of the five tribes and “tended the council fire” of the Iroquois Longhouse; as such they were one of three “Elder Brothers” in the Confederacy. 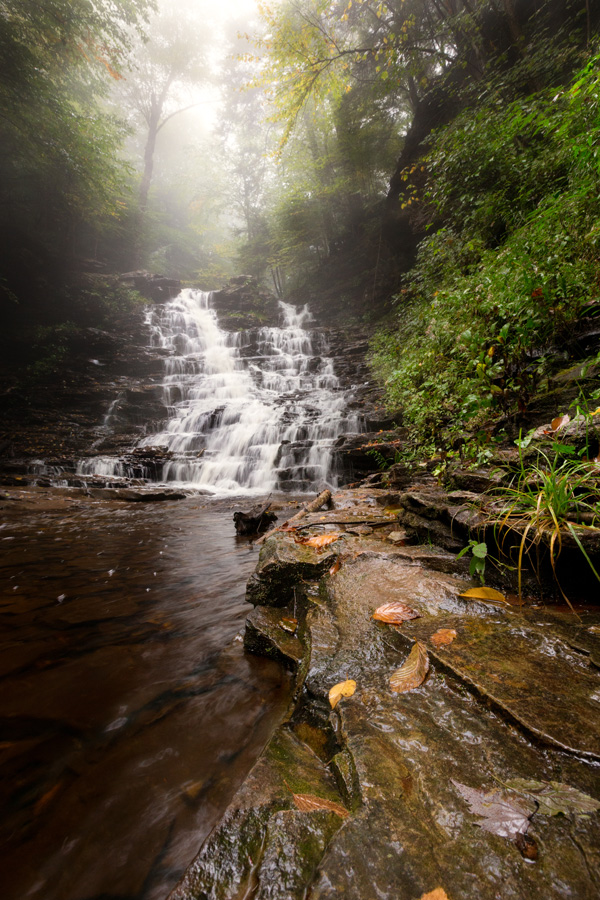 Usually, walking around the waterfalls you have to be very mindful of where you step since the rocks are very slippery.  That’s a given.  When it’s been raining, and there are leaves on the ground, increase the slip and fall factor up a few notches.  During the adventure down the trails, I was met with cool mists that were crawling through the forest, and gentle rain showers.  At times I wasn’t sure if it was raining or it was just the trees shaking off like a wet dog.  Needless to say I was fairly wet, even though I had on outdoor gear and a hooded rain jacket.  It was mostly due to the incredibly high humidity.

All of the water, coming from every possible direction had one serious side effect.  At first I was constantly making sure my lens was dry since it often had either fogged up, or had a fine spray on it.  Towards the end of the hike, my camera started malfunctioning, and there was nothing I could do to fix it.   It was frustrating and worrisome, but fortunately it was towards the end of my hike.  I didn’t get great shots of the last few waterfalls because of it though. 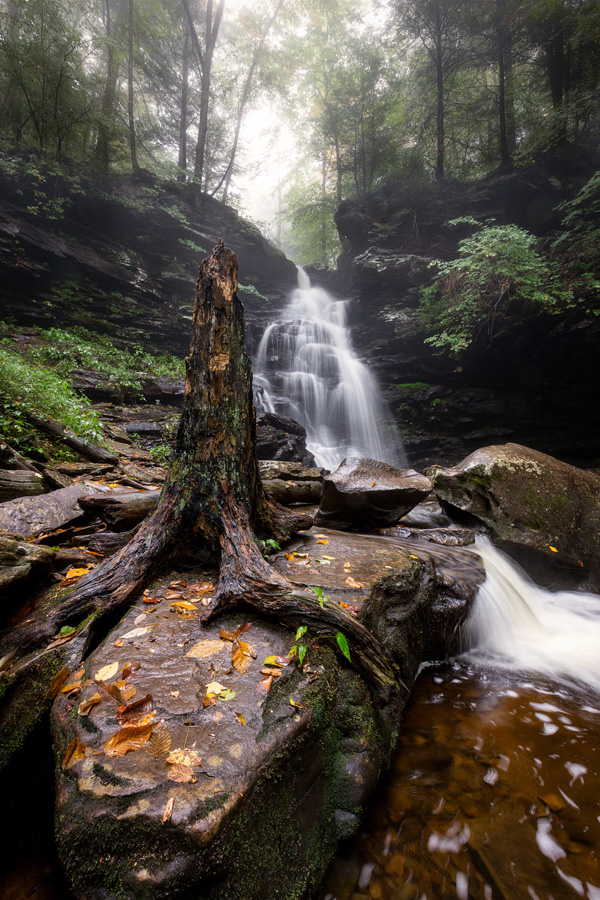 While out shooting these falls, I always like to stop and think about what I’m looking at. At least three major ice ages in the past million years have been the final factor in shaping the land that makes up the park today. That’s right, all of this was covered in glaciers and ice sheets. It was these glaciers that carved the paths that the water continues to follow and erode. 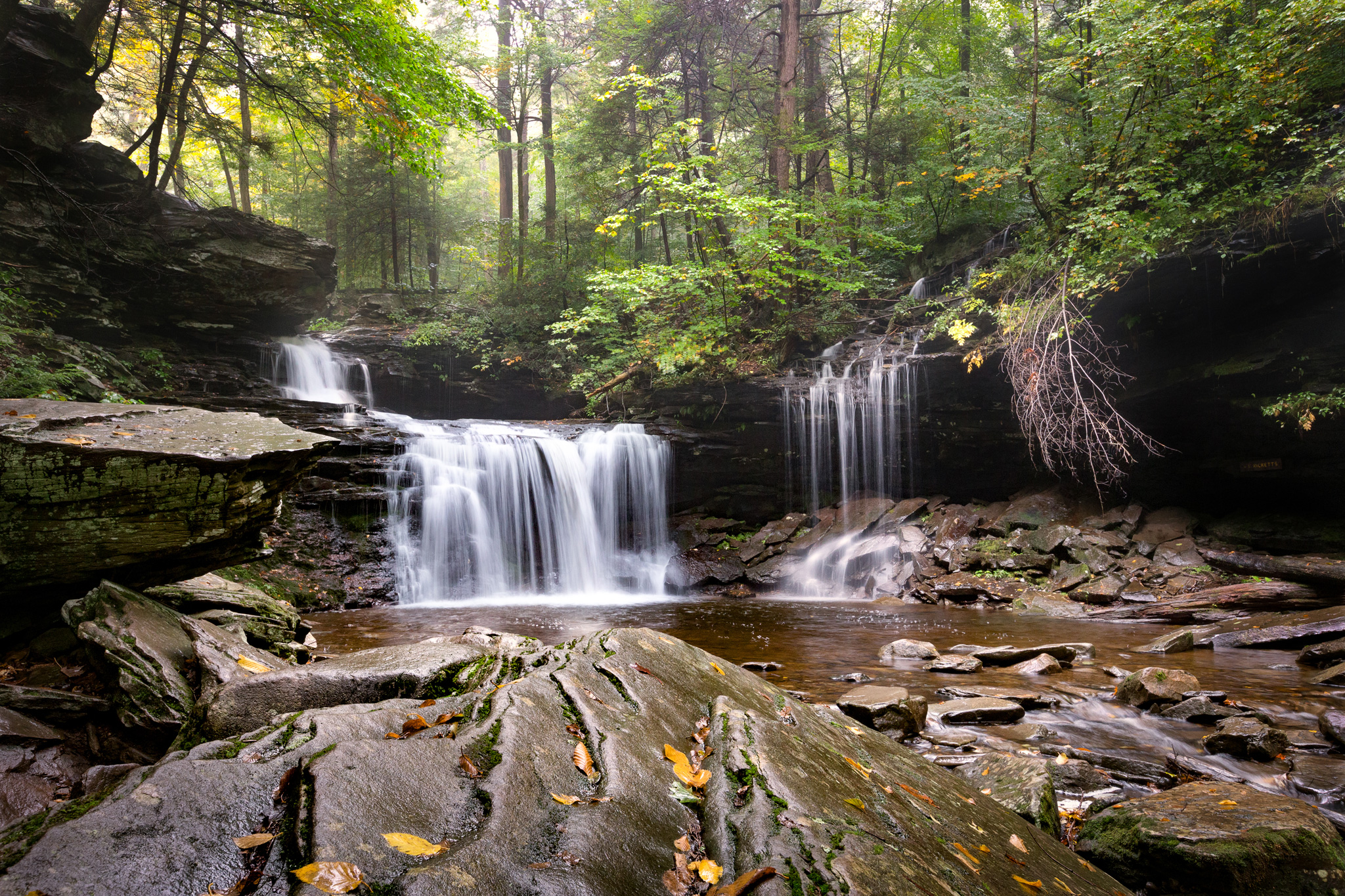 For this shot, I got nice and cozy on a cold wet rock.  At this point in the adventure, I knew there was nothing I could do about staying dry. From walking in the cold water, to the heavy mist in the air, or the on and off rain it was just unavoidable.

This is the R.B. Ricketts waterfall. Robert Bruce Ricketts (1839–1918) was a colonel in the Union Army in the American Civil War who fought at Gettysburg. Ricketts named 21 waterfalls on Kitchen Creek and hired six workers to build the original Falls Trail from 1889 to 1893.

While moving around the base of the waterfalls, a few of them create their own air current. If you walk in the right area, not only will you feel the cool mist, but you’ll be met with a cooling breeze.

Thanks for taking the time to check out my latest adventure!  If you are interested in any photo you’ve seen here, or anywhere on my web site, contact me and let me know.  I also have a store on Etsy so feel free to check it out.