This marks year 3 for my firefly adventures in Western Pennsylvania. It was a battle with the elements once again. Pop-up storms, humidity, dense fog, and temperatures ranged from 90 during the day and low 50’s at night. This year had an added concern with traveling – a global pandemic.

On top of my usual location planning and scouting, I tried my best to keep any contact with people to a very minimum. So this year I packed a lot more water and camping food than normal to keep myself safe. Not to mention, I had no idea what the grocery store and restaurant situation was like six hours away from my home.

This first set of three photos here are from my first night and it was a perfect way to kick off the trip. This was my first time with a new second camera that I had purchased exclusively for this trip. When taking time lapses of fireflies, there’s a bit of guesswork and a dash of luck involved. You just don’t know if there will be any fireflies lighting up, and if they do, it might not be where you want them in the shot.

For the shot above, I went with a more out of focus out look for the flashes which is why the lights look large. In the shot below, I kept the focus far away which gives the blink trails of the synchonous fireflies a more precise look.

In the photo above, I really like how you can see where the fireflies prefer to be. All along the base of the forest line was the place to be. Every once and a while an adventurous bug would glide by closer to me. Check out the high flyers above the tree line too!

The next day I scouted out a few locations that I remembered were hot spots for the synchronous fireflies. I took a few daytime photos and tried to imagine how they would look at night with blinking lights around. Day turned to night and off I went. I knew there was a chance of rain so I had all of my gear covered. I was ready as I could be. Cameras were set up in the forest and I waited.

It grew dark, but then it began to rain. No cell service at that location so there was no way I could look at the radar to see what was coming. I can’t tell you how crucial knowing the weather is to an outdoor photographer. You have to become part weather person.

The rain came and I waited. For 20 minutes I sat in the darkness. It wasn’t giving up and then I heard thunder so I packed up. A tree had also fallen on the forest service road I was driving out on. Luckily it was really rotten and easy enough for me to drag it away and give myself enough room to drive around it. I recorded a quick clip of the rain before I left, it’s pretty dark and lonely out there!

On the way into the forest every night, I passed many areas like this. Things lined up on this night, so I made it a point to pull over and take a photo. There was a roaming mist in the valley that formed and it came close to ruining my shots. Luckily the thick forest seemed to keep it at bay.

As I was taking this photo, out of no where an off-road golf cart pulls up to me and stops. Usually this is when people stop to talk about taking photos, or how much of a beautiful scene it is. Not this guy.

Off-Road man, “That’s ok. Because I do.” Then he cackled and drove off, never to be seen again.

This was the second night at this location. I was ready for the rain, with covers on my gear and umbrella in hand. I knew where to setup and everything fell into place.

While taking the photos above, I walked along the road. I knew I had to return one more night can capture another angle from the road. Some paths intersect. Some parallel, and others run opposite. Some may go off on their own. Regardless of direction, they share the same world and coexist.

This is the other direction of the road I was shooting in. I had finished with my second camera and was going to pack up, but I decided to grab a shot of the trusty Subaru. On this trip, I had to get around flooded areas, a fallen tree in the road, and also got a stone stuck in my brake caliper somewhere. It would squeal at the most random times for two days before some ‘evasive’ driving and vigorous banging around the wheel made it drop out.

Check a look at the reflections on the side though! It’s so dark that when they glow near the road or grass it clearly lights up the area. 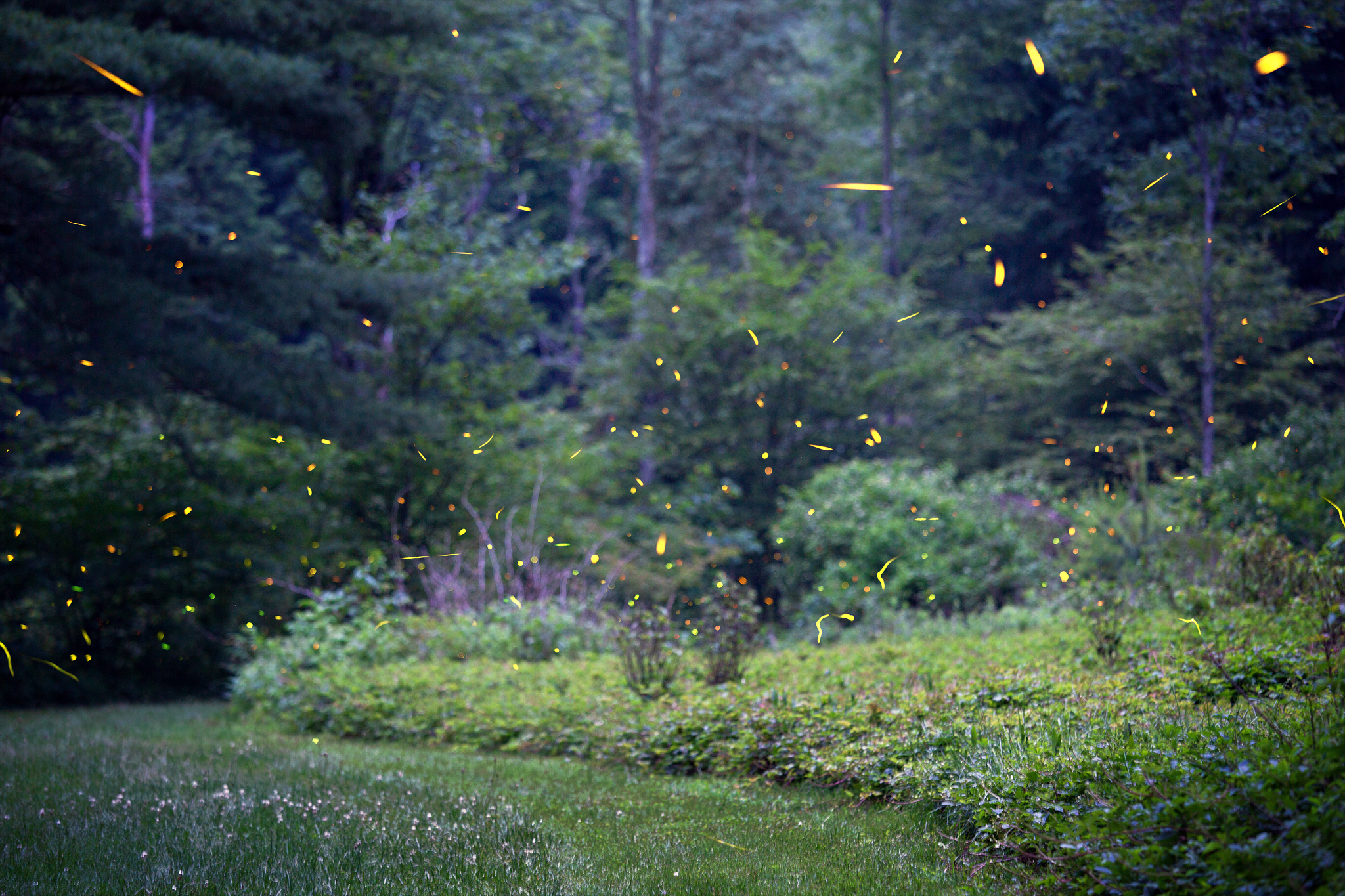 Part 2 includes not only more synchronous fireflies, but Chinese Lantern fireflies. I have some Milky Way photos, and a few compositions that just never happened to have fireflies in them. They don’t always fly where you want them to. Check a look!