From late May to the middle of August each year, Machias Seal Island becomes the nesting ground for numerous migratory seabirds.  I went to see and photograph the Atlantic puffins there in early August of 2018.  It is the largest puffin colony along the Maine coast.  The island itself is so very small, only 15 acres and is 10 miles out in the Atlantic.  The U.S. and Canadian Wildlife Service designated it as a bird sanctuary, and it also is home to a lighthouse that is maintained by Canada.  To this day, both the U.S. and Canadian government claim sovereignty.  It’s certainly nothing to start a war over though. 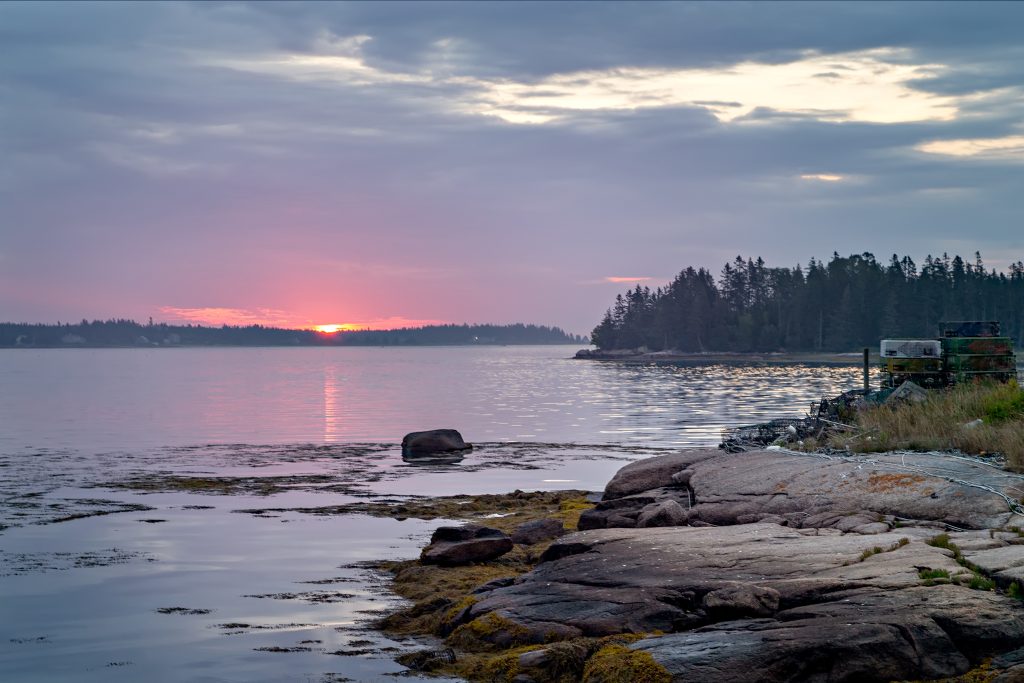 My day started at an Air BnB in Beals, Maine.  Wake up time was 4:45 AM and we wanted to be on the road by 5:15.  I was with a group of 5 other photographers, some of which were from as far south as Virginia.  We were eager to hit the road, and were treated to just a touch of sunrise color. We then headed up north for about 45 minutes to the small fishing town of Culver. 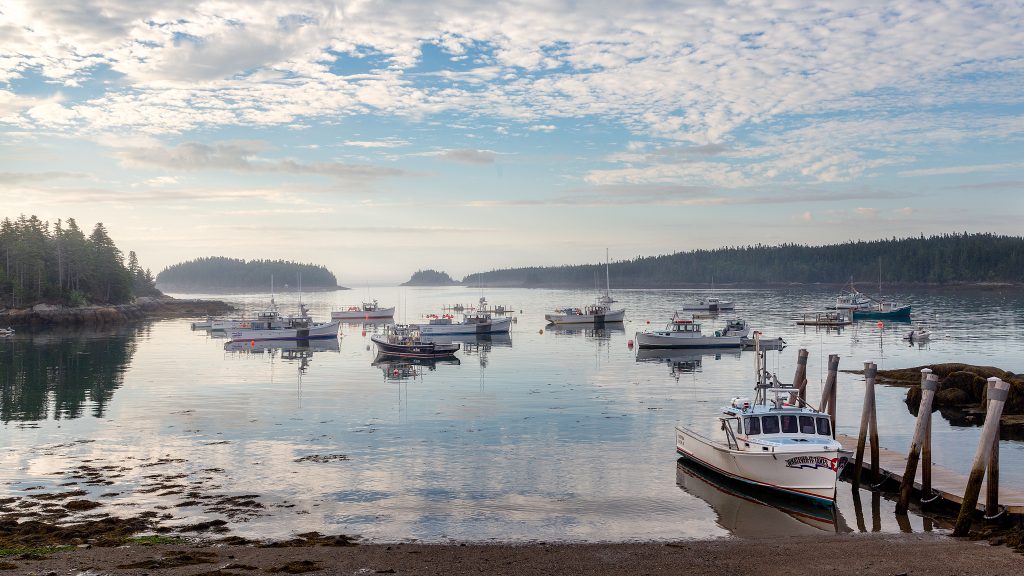 We reached the fishing docks with plenty of time to double check if we had everything we needed for the ride out.  There’s no going back to your car for a lens or a jacket on this trip.  Bold Coast Charter Co. is the only tour that is permitted to bring people on the island, and they run tours every single day, weather permitting, from May to mid August.  Captain Andy told us that the island weather can be different than the mainland, and changes rapidly at times.  It could be shrouded in fog, or the wind whipped waves could make landing onto the island tricky, if not impossible. 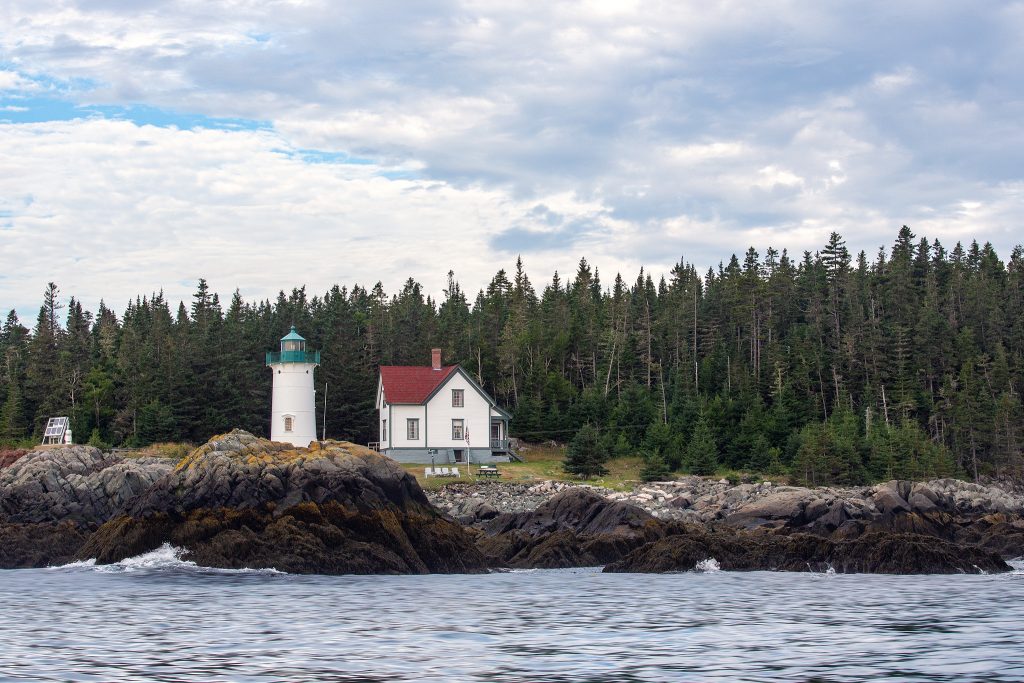 On the way out of the harbor we were treated to this little gem, the Little River Lighthouse.  It’s only accessible by boat since it’s on an island, but you can actually rent the rooms in the house and stay overnight!  Another fun fact is that because this area sits near the Bay of Fundy, it experiences huge swings in tides.  I’m talking a difference of 15-20 feet.  If you look at the rocks in this shot, you can see where high tide goes up to.  I’d love to be there during a storm, with huge waves crashing into the rocks. 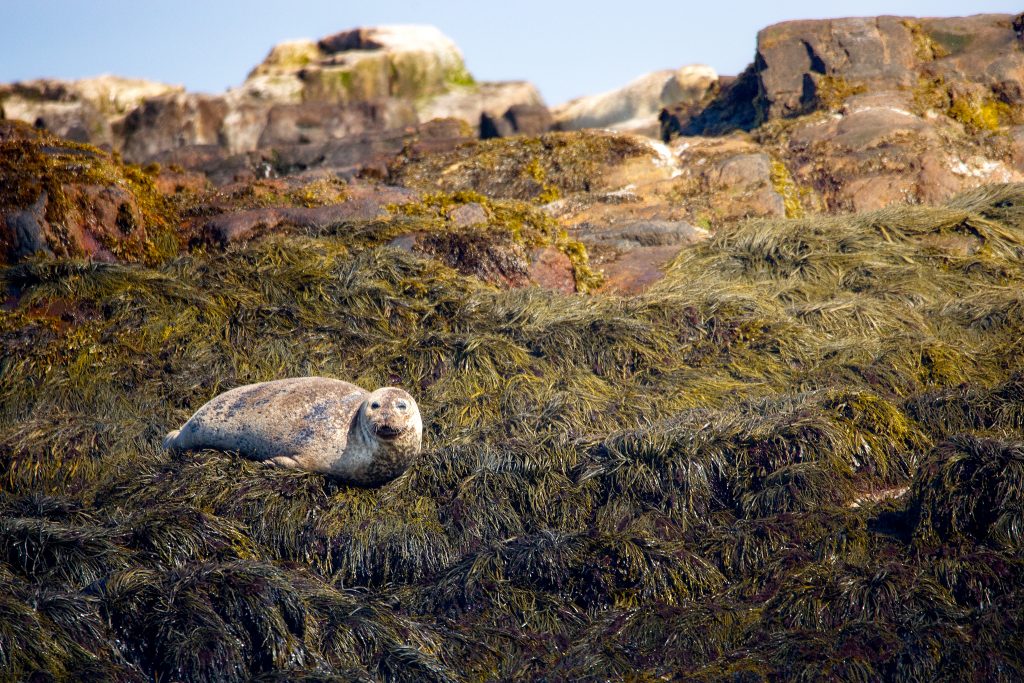 Another Harbor Seal keeps an eye out, as we pass by.

Just under an hour long boat ride, and we were finally circling the island.  You can’t go to Machias Seal Island without seeing some seals of course.  There were dozens of harbor seals snoozing on beds of seaweed as we approached the landing.  As you can see here, they were not impressed, nor bothered by the noisy boat cruising by them.  Once we were in 100 yards or so from the island, we hopped onto a large outboard skiff, only six at a time.  They only allow around 15 people a day on the island. 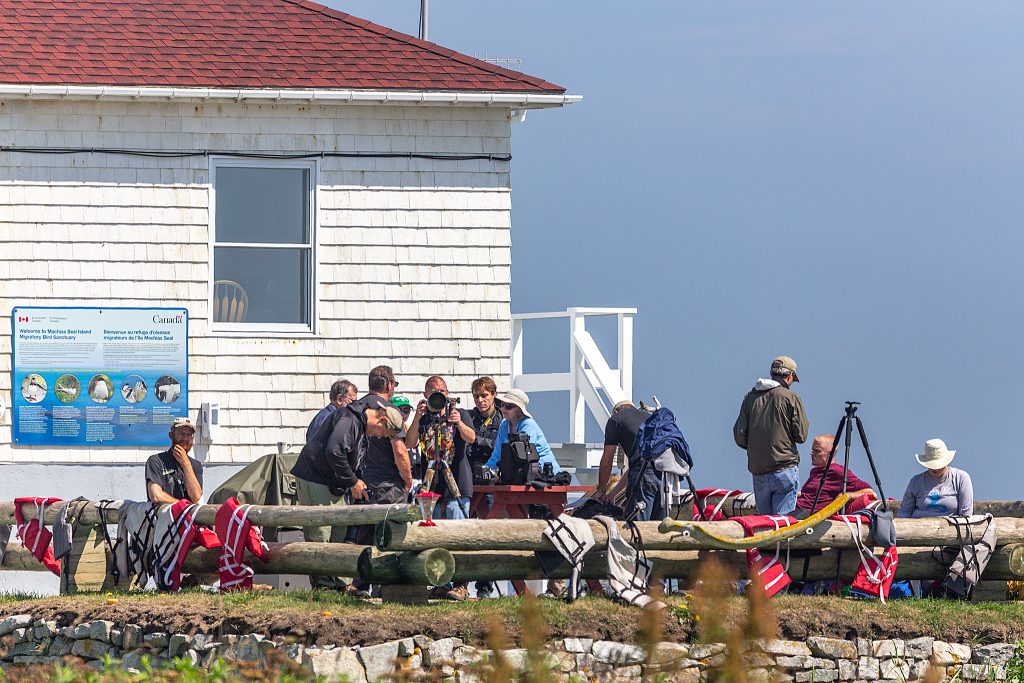 Time to gather and wait, no wandering allowed

This was our waiting area, just outside the light keepers house.  We threw off our life jackets and got ready to go into one of the four tiny bird blinds setup around the island.  Only 2, maybe 3 people can fit in the blinds and you have 45 minutes inside.  The great thing is that the puffins are accustomed to people, so even after you get in the blind and scare them off, within 5 minutes they fly right back.  Next thing you know the puffins surround you, doing their thing and are as close as 10 feet away.  I didn’t go during the first round, I wanted to practice taking shots outside and get into the zone.  Taking action shots isn’t my forte and I was absolutely outside of my comfort zone.  It was nice to get some practice in though! 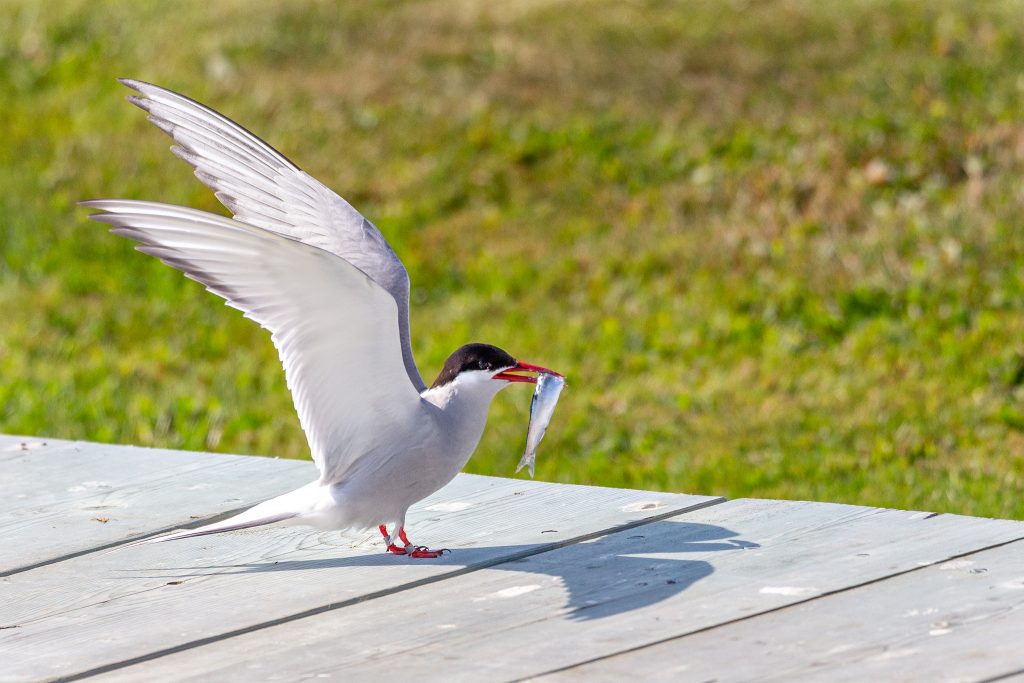 Breakfast on the boardwalk 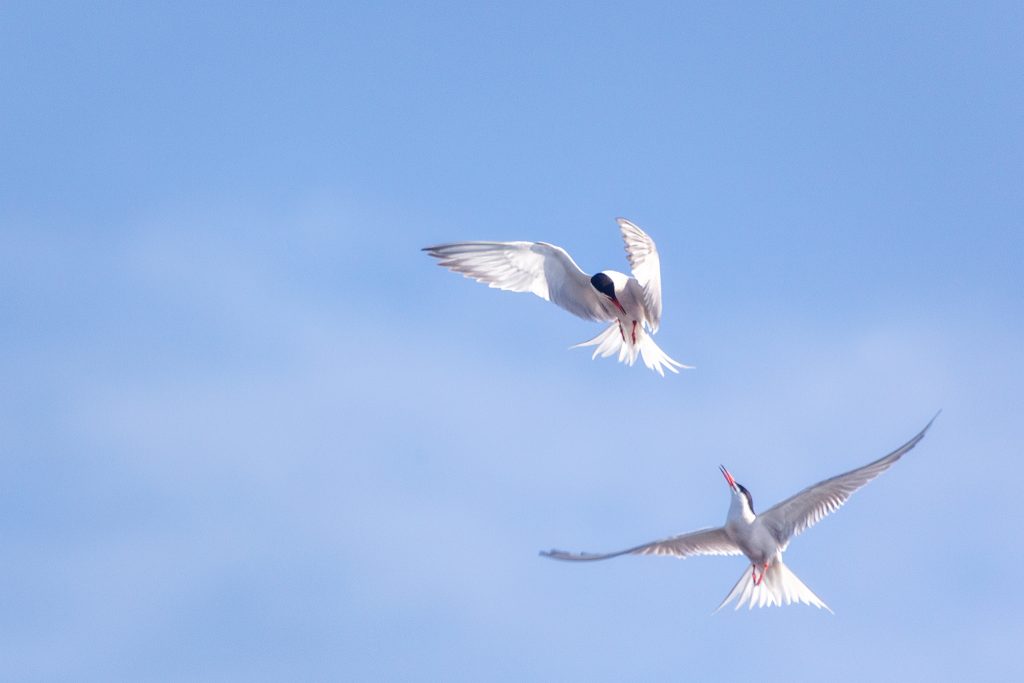 Alright, enough of the buildup!  It’s time for the puffin photos! 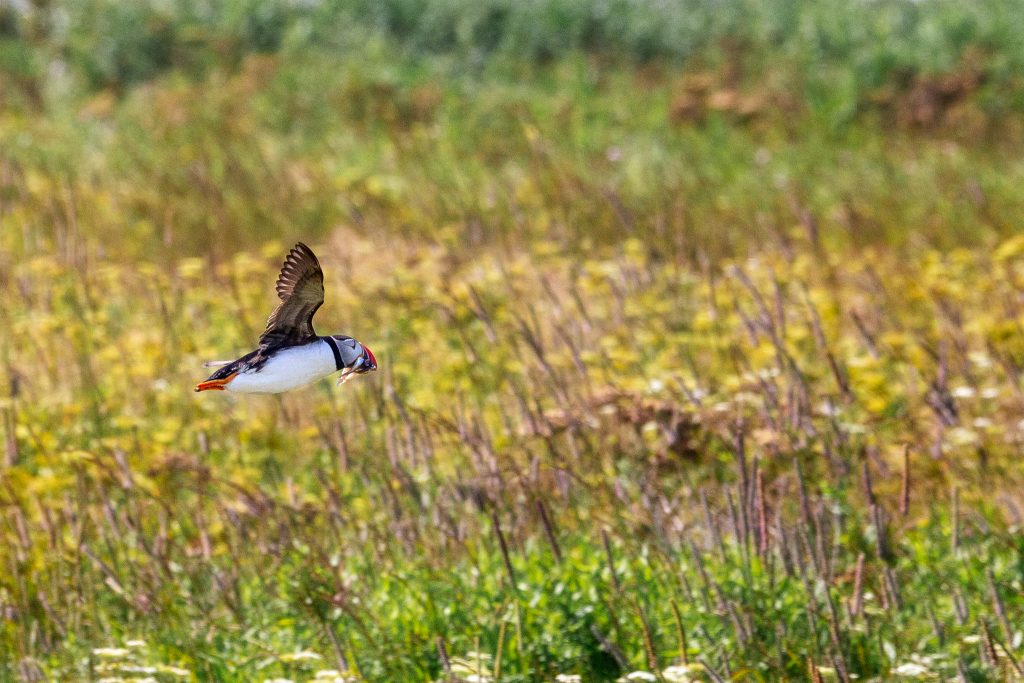 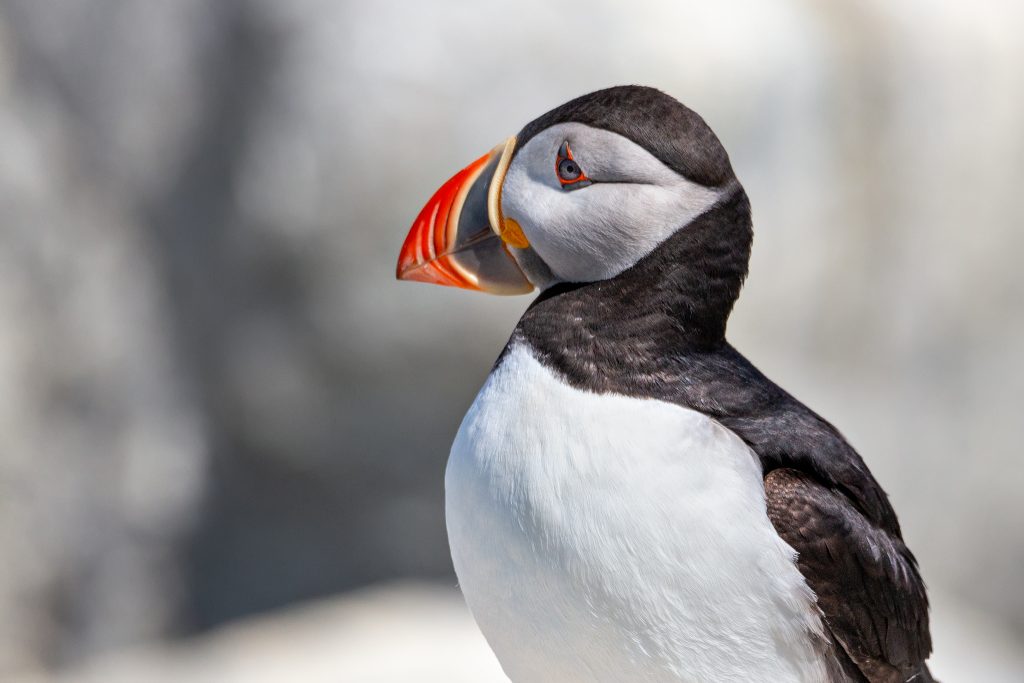 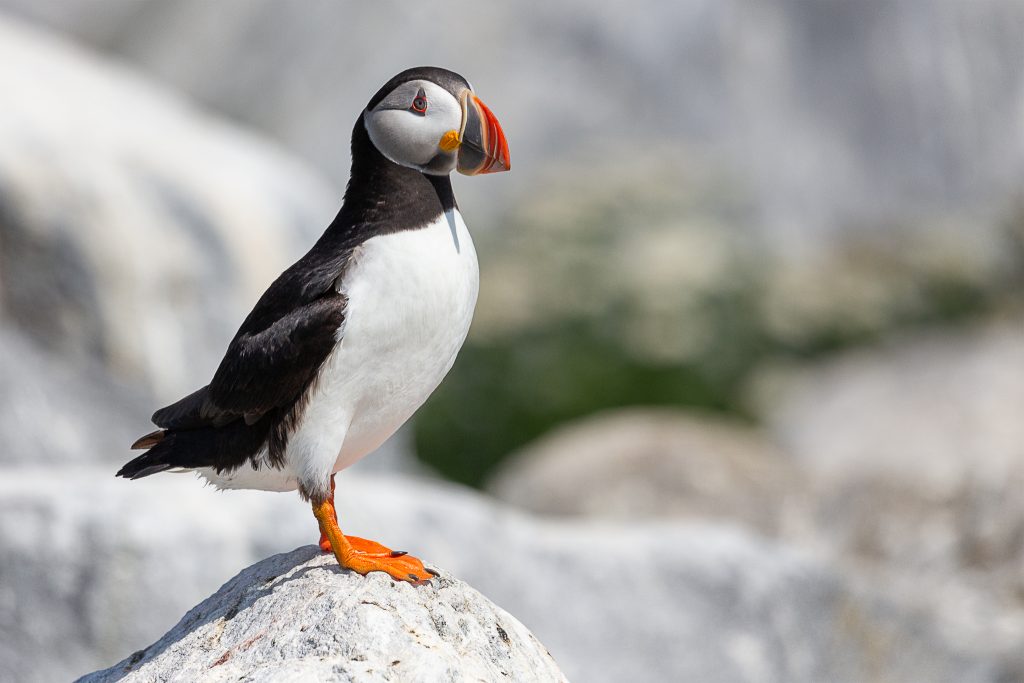 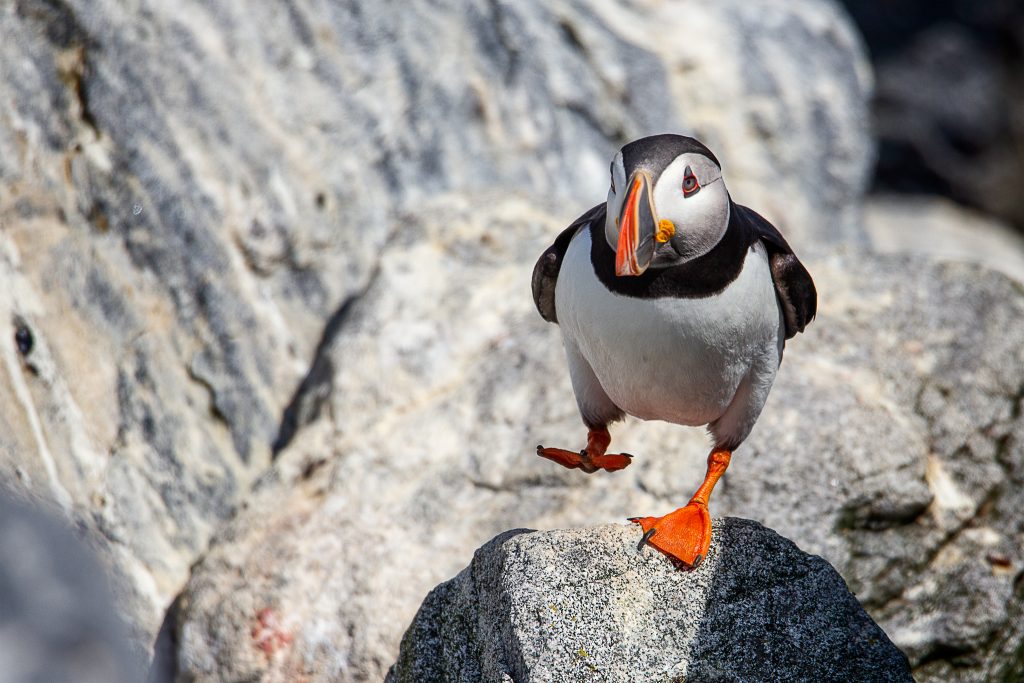 Taken moments before it disappeared into the rocks 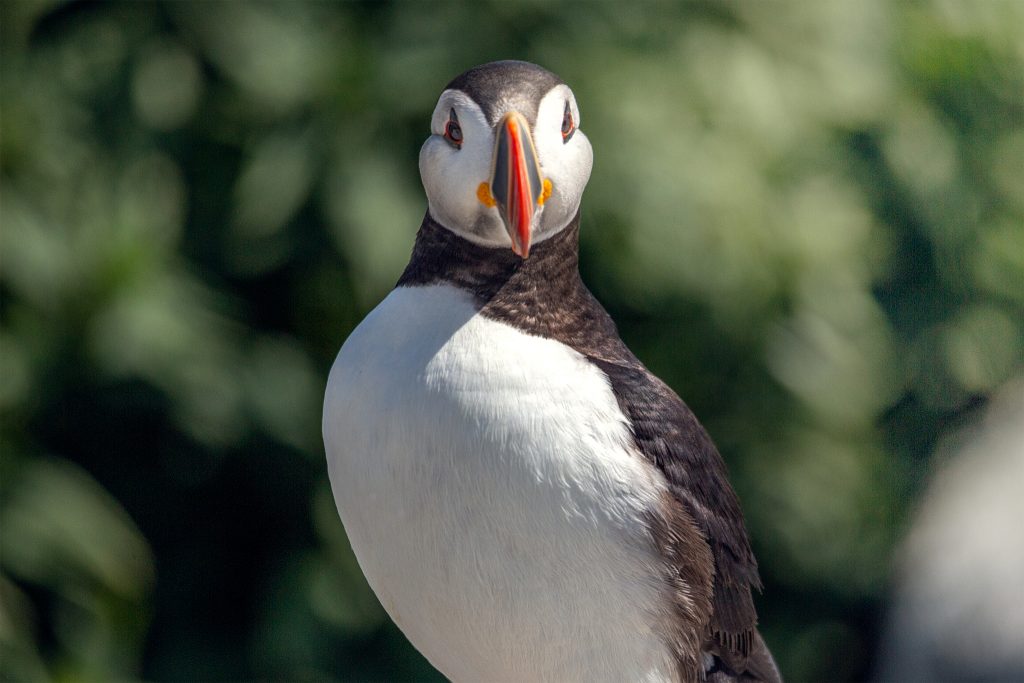 Profile of a Puffin 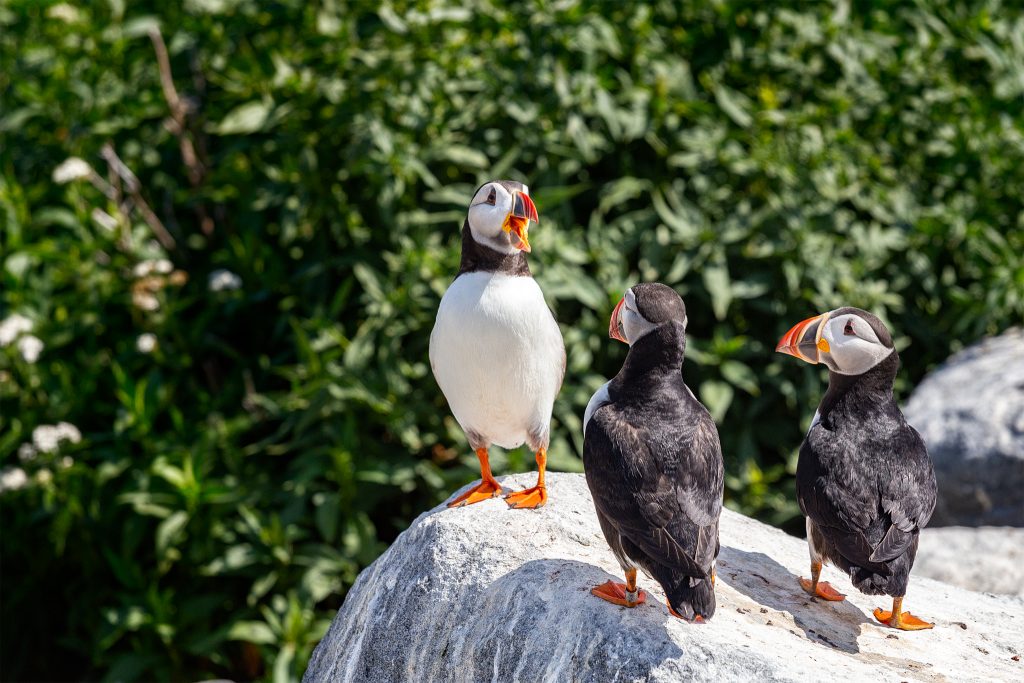 This one has so many great captions, I’ll let you pick one! 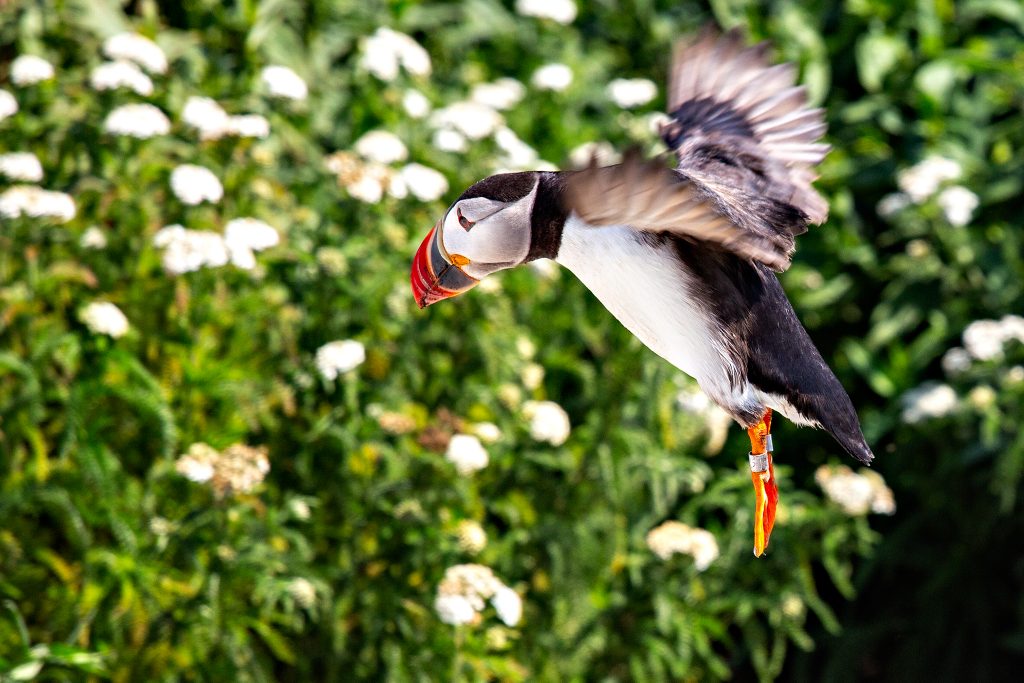 A Puffin comes in for a landing 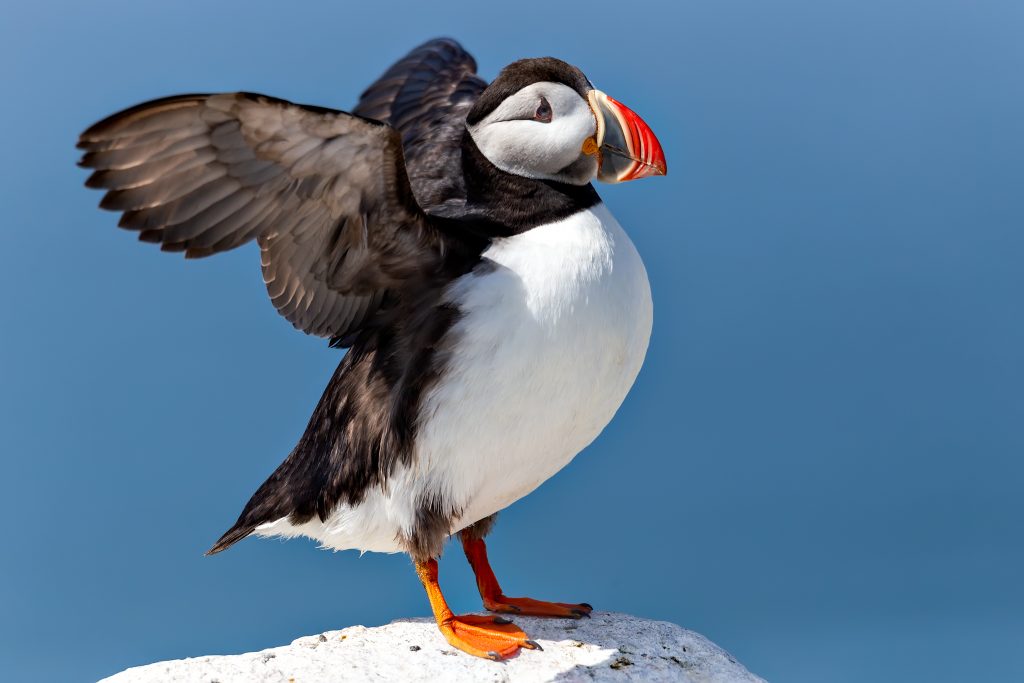 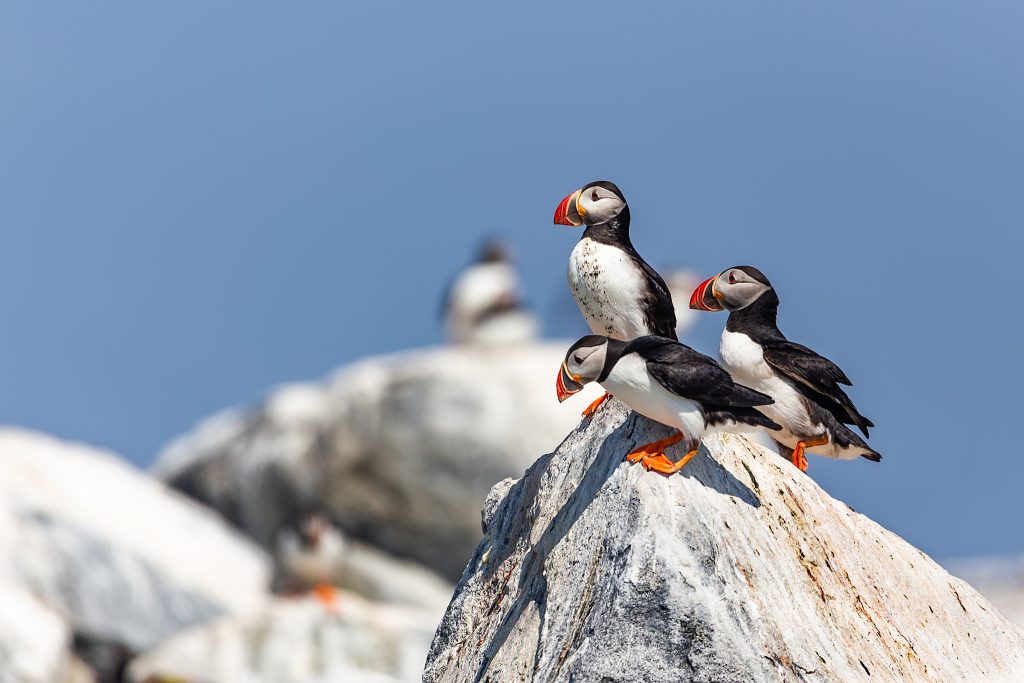 Groups of Puffins all over the rocks, rarely sitting still for long

In the photo above, the one puffin in the back has what looks like black spots on its chest.  It’s actually dirt.  They do not use open and exposed nests, they use the rocks to nest around.  They also make earthen burrows and dig tunnels.  Cool, right? 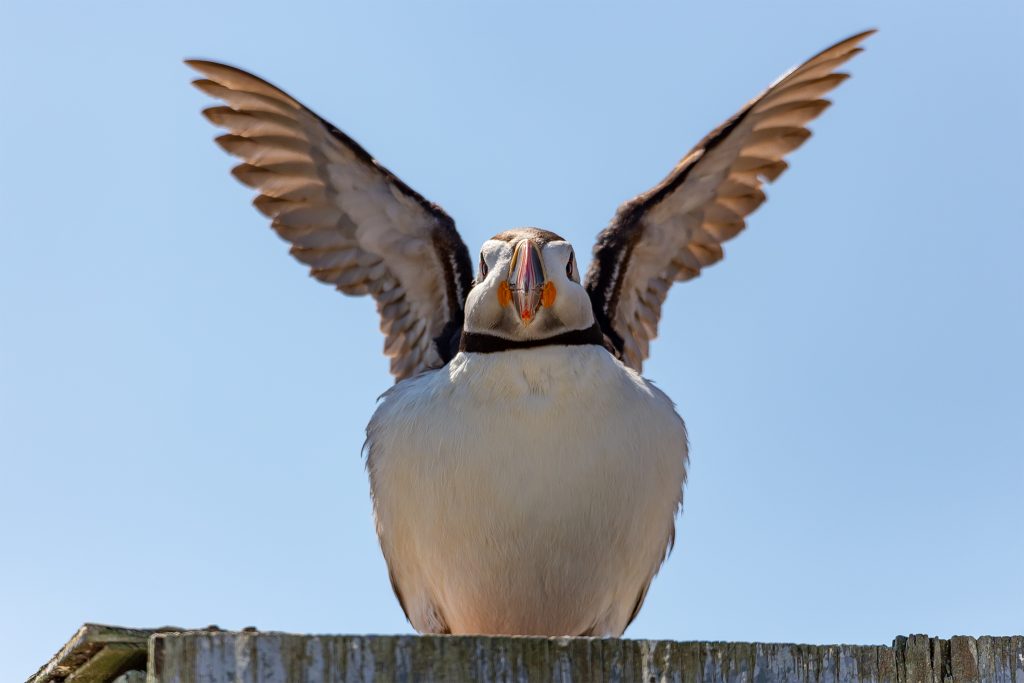 A Puffin gets comfortable atop the wooden bird blind 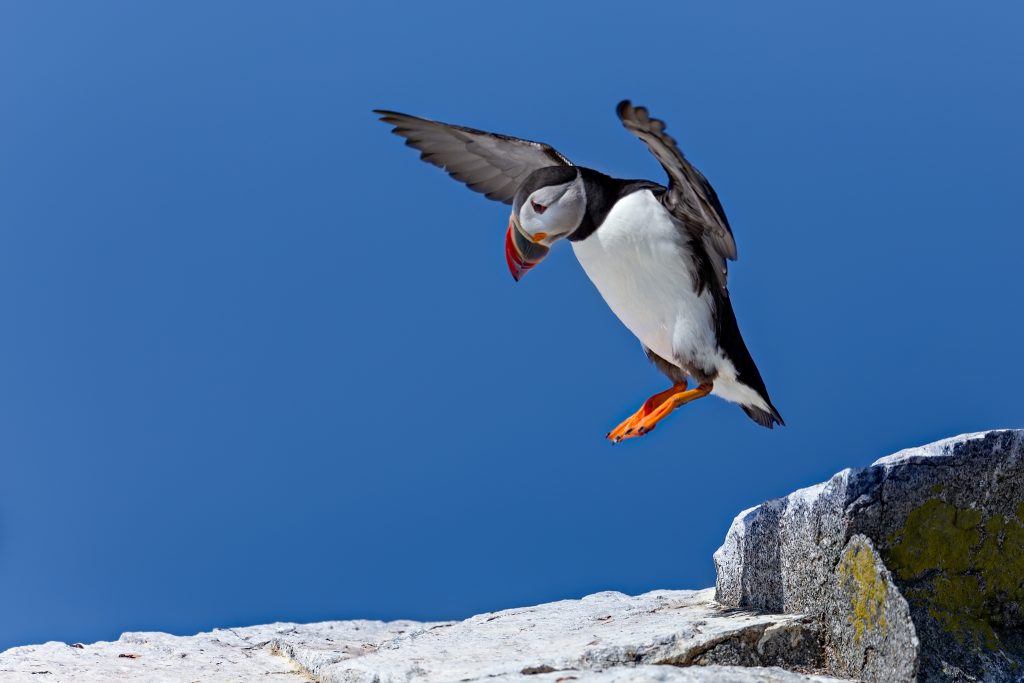 For just a few months, the Puffins call this island home. And they know how to get around the rocks just fine.

And after about 2 hours on the island it was time to leave, and Captain Andy said it was calm enough to do a victory lap around the island.  More harbor seals were around, as well as a group of horse head seals that were all in the water.  Between the boat rolling in the waters, and the seals bobbing up and down, I decided to just sit back and enjoy the view. 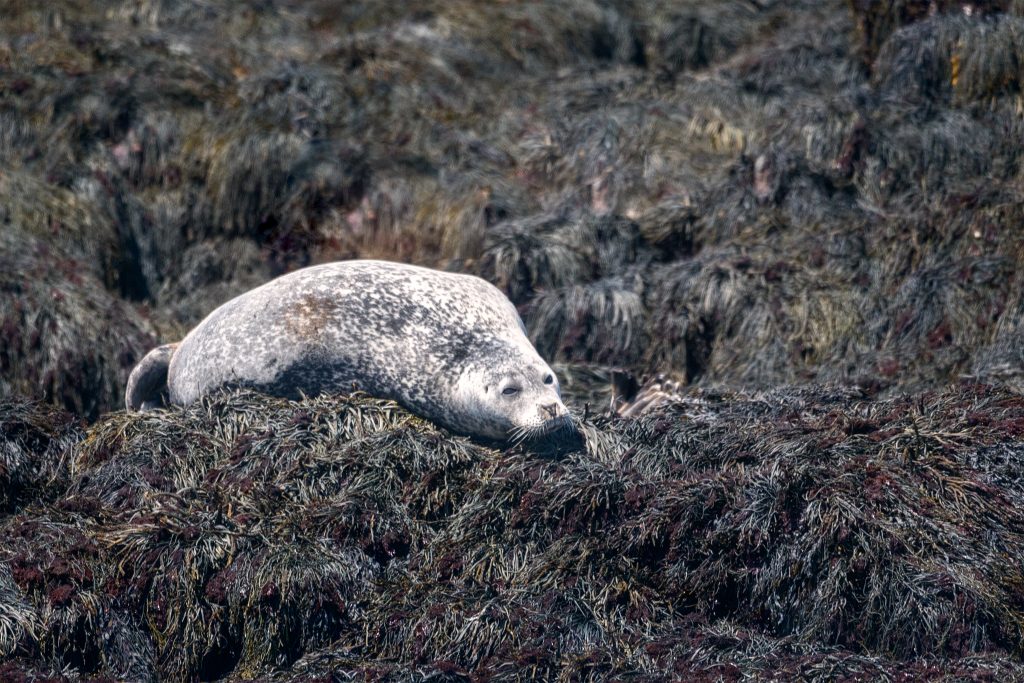 And with one last pass of the island, I knew that not only did I have some great photos to share, but I had yet another adventure I’d never forget under my belt.  It’s events like this that keep me going. 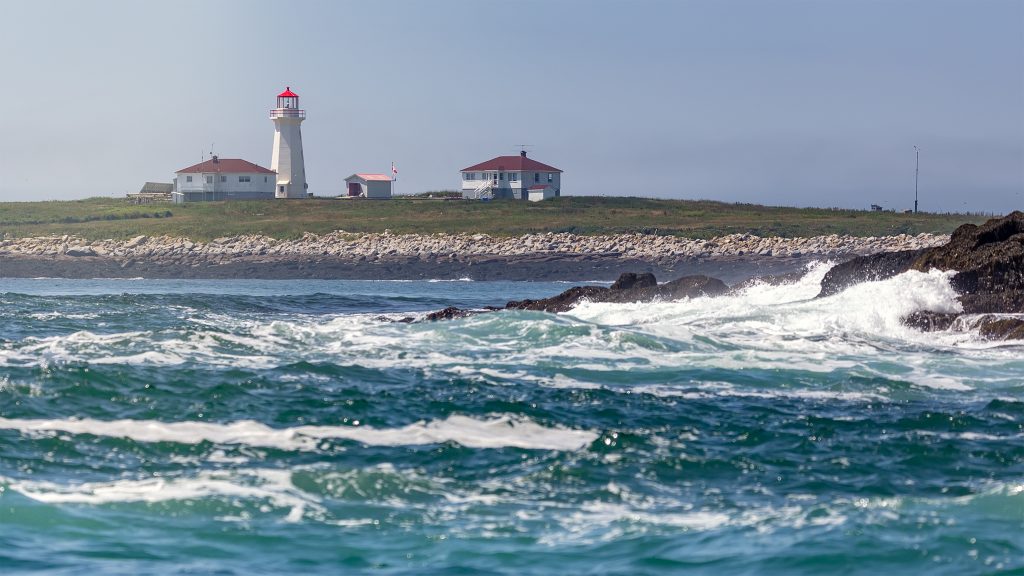 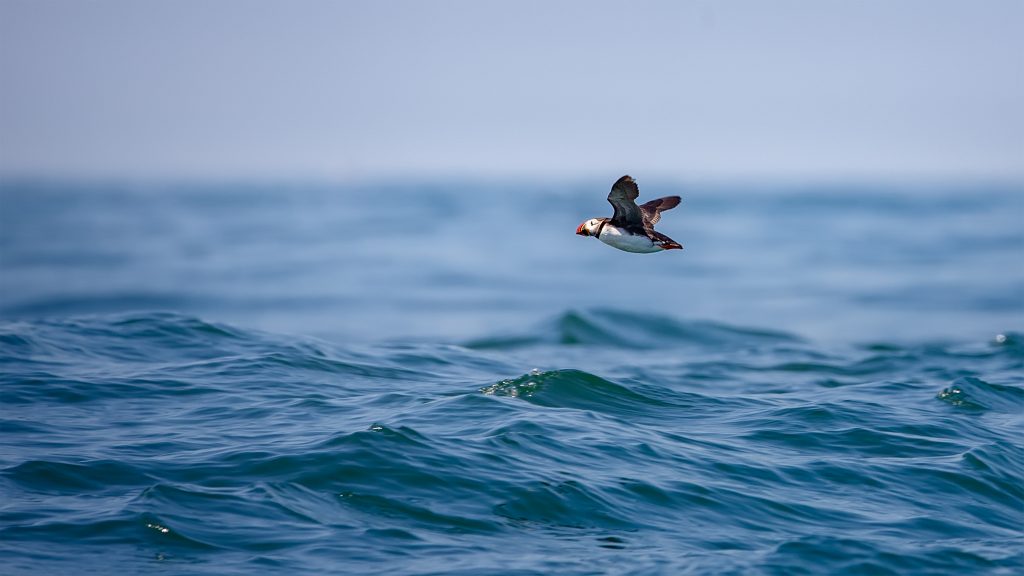 The Last Flight Out – One last Puffin does a flyby on the boat ride back to shore.

I’m thinking about going back again next year, but it is very difficult to get tickets for since it sells out fast.  If not, I’ll definitely be going back to Maine again regardless.